We had to come to Medana Bay, Lombok for our visa renewal. Yes, the Indonesian Government does give you three months when you pay for the CAIT, however after two months you must pay more to renew for the last month.

Medana Bay is a long way from the Indonesian Immigration/Customs office and a return taxi fare is about $50. We considered hiring a car between two couples and getting it done ourselves, however we needed to go three times. Firstly, to lodge the application and passport, secondly to have our fingerprints taken and lastly to pick up our passports with the renewed visas. Also couples that chose to do it themselves had “difficulties”. So it was suggested to us that we pay a large sum of money per person to the marina staff for them to take care of lodgement and pick up. The fee included them taking us into the Immigration/Customs office for fingerprints and to the supermarket. So that is what we did.

We understood that this process would take about four days which is what the Indonesian Government took to do our visas in Australia, and they did it even quicker when we arrived in Kupang, Indonesia. So that seemed fair. We quickly made a beeline to the marina office as soon as we arrived to get the process underway. We were asked a lot of questions and assumed the application form would be submitted on the day. The next day we were told it hadn’t been submitted at all and we had only registered with the marina office. So then we filled in the correct forms and paid our money. We thought the application would go to the Immigration/Customs office right away but they wait to the end of the day to lodge them as a group. So you don’t pay individually for an individual service you pay individually for a group service. We thought we had lodged on Tuesday but the Immigration/Customs office only received our application on the Friday.

The next day I did a tour of Lombok with Jon and Sue (Ocelot) while Peter fixed the boat. Our driver took us around Lombok’s stunning northern shoreline and we then visited local cloth and cane weavers, where Sue and I found some great souvenirs.

Then it was up into the central highlands for a lovely lunch overlooking the rice paddies. By late afternoon we had driven up through the National Park forest and had come out at the top of a volcano for some stunning views and some yummy local strawberries.

The next day Peter and I then decided to head over to Gili Air and Gili Trawangan for the weekend to get some respite from the constant swells and to do a bit of snorkelling. It was a quick trip and by lunchtime we had walked around the tiny island of Gili Air for some much needed exercise. To counteract all that goodness we both had a double scoop chocolate /coconut gelato on the way back. Naughty but yum.

We left Gili Air really early the next morning so we could snag one of the government mooring buoys off the SE corner of Gili Trawangan. It was a really windy day but still warm and once we were safely settled we got into the dinghy and headed up the east coast of the island and then plunged into the water around the NE corner.


We then drift snorkelled with our dinghy catching the strong current from the dive/snorkel site Deep Turbo, down through Trawagan Slope and Biorock, then around to Manta Point.

The coral was very disappointing as it has suffered from numerous years of poor boating and fishing practices but the people seem to be working hard to bring it back. What was amazing though was the huge numbers and diversity of fish that occupied the area. It was like swimming in fish soup. We even swam with three turtles but sadly no Manta Rays.

We returned to Medana Bay to find that the first group of yachts of the Sail Indonesia fleet did get processed within the four day period and the crew were very happy. They did a tour of the island and lazed around the marina and restaurant then they were on their way. The tail end of the fleet seemed to be forgotten somehow or maybe the marina staff thought ‘the rush was over we can take our time now’.

This ended up being a very annoying time for us because we happened to be in the tail end of the group. It wasn’t just the amount of money we had to pay for this ‘service’ but the endless waiting in an average anchorage, with nothing much to do at the marina or in the very small town nearby. On the ninth day we were finally underway again but severely late for onward engagements and way behind the rest of the fleet.

Oh the value of hindsight!  If we had our time again, we would have gone around to the west side of Lombok, away from the swells, and within the proximity of a larger town and the immigration office. Then use local transport to get to the Immigration office. It may be possible to get processed in one to three days if you get there early and have all your documents in order. Another option, if you are slightly ahead of schedule, consider getting the visa renewal processed in Bali. If you get stuck for a long time then the activities of the island of Bali will no doubt keep you entertained.

It was a long haul from Lombok to Bali and with no where to anchor safely overnight in between, so we left Gili Air at 0430 hours the next morning. Some wind piped up around 0500 hours and we made quick progress motor-sailing across the channel between Lombok and Bali. The wind then slowly died and by midday it was slow going but we just managed to arrive in Lovina Bay at dusk and we were thrilled when a local long boat guided us safely into the anchorage as it got dark.

The next morning the same boat arrived early at the back of the boat asking if we needed water, fuel, gas or laundry attended. Nope, we had plenty of time in Lombok to get this done. After watching others arrive we realised they had a system going. A different long boat claims each yacht as they enter Lovina Bay and then organises all they need. We were so impressed at how enterprising and organised these fishermen were and wished other towns along the route had thought of this idea.

All yachts need these services and it often takes days and money to find and then attend to these essential needs. But here it is organised within minutes and then brought to your boat for a small charge and with no effort on your part. All crews were then free to partake in other pleasures like tours, restaurants and/or shopping - more money generated for the island.


The next day we hired a car with Peter, Melila, and children Sam, Erin and Isla, to take us to some of the local highlights of northern and central Bali.

With the two Peters’ doing the driving/navigating we climbed up into the mountains and had a swim at a waterfall, then we paid our respects attired in sarongs at a small Hindu temple, then we had a lovely lunch overlooking a volcanic lake and after visited the large Hindu temple on the lake. Lastly it was a leisurely drive around the rice paddy fields before returning exhausted to Lovina Beach. 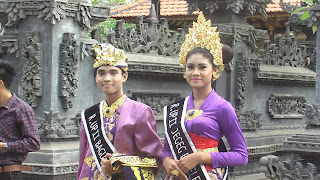 The following day was the official Bali welcome ceremony and dinner for the Sail Indonesia crew and it was sensational. This ceremony was the most impressive so far and as Bali is known for its unique culture, being Hindu in a Muslim country, it didn’t disappoint. 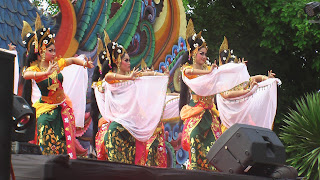 It seemed every dancer from the north of the island performed for us along with schoolchildren and local business people. The dancing was superb, skilful and went on for hours.

Then we went shopping for an hour or so which is a pleasure in Bali as they have everything, all in one place and at a very good price. Finally we were shown to dinner and again the food was sensational and the best we had so far. 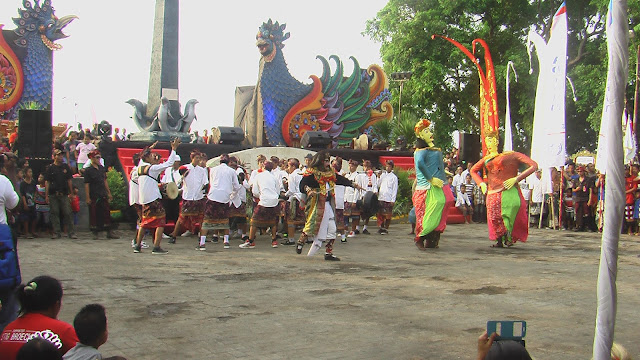 Overall Bali did not disappoint. It didn’t bear any resemblance to what I had seen in 1981 but no country does after all that time. Peter and I both loved it and we crammed as much as we could into the four days we had there. We just wished we had more time but we only had a month to go before we needed to check out of Indonesia and in that time we needed to go from a latitude of 8 degrees south to the Equator, then up to 1 degree north to Malaysia. With numerous nautical miles and official stops still to go and a lot of islands still to see,  we had to be on our way.

Posted by Reverie: Off The Beaten Tack at 21:59